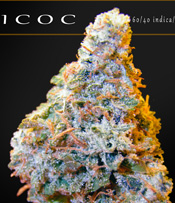 Chemdog D is actually the sister strain of the well-known Chemdon91. This marijuana strain has the same discovery history. ChemdogD and Chemdog91 were actually found in the same bag of seeds. There is a note saying that Chemdog D is not actually discovered not until 2005. Also, not produced until the holders of the original seeds finally cultivate the seeds after ten years. This marijuana strain is actually a hybrid of both Indica and Sativa strains. It is also known as mostly Indica in the background despite being a hybrid of the strains. Moreover, this marijuana strain would give you great intensity proposing its dominant Indica traits.
This marijuana strain would give you a perfect effect. ChemdogD would give you a strong, calming, as well as more stoney effect. Also, Chemdog D would be giving you great medical uses since its genetics coming from Indica and Sativa just went very well in giving it unique traits.